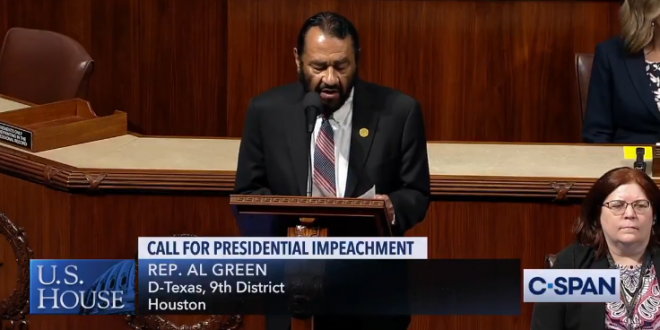 The House is slated to vote Wednesday afternoon on whether to immediately consider articles of impeachment against Donald Trump, the first barometer of efforts to remove the president by the Democrat-led House.

The move, forced by a Democratic lawmaker from Texas who used a procedural mechanism that required action within two days, is unlikely to succeed. Speaker Nancy Pelosi has long opposed efforts to immediately begin impeachment proceedings against Trump and confirmed she would not support Green’s resolution.

“No I don’t,” Pelosi told reporters Wednesday when asked about Green’s effort. “Does that come as a surprise?” she added with laughter.

"Donald John Trump, president of the United States, is unfit to be president." – Rep. Al Green (D-TX) filing articles of impeachment against President Trump for the third time.
🎥 https://t.co/a7MZYnkopF pic.twitter.com/aRd5osLLx4

This marks the third time the congressman from Texas has forced a House vote to impeach the president. https://t.co/zGSrjuAMz6

NEW: The House will vote for the first time *today* whether to advance articles of impeachment against Donald Trump — a move forced by Rep. Al Green of Texas.

It's likely to fail without Pelosi's support, but it's an early barometer:https://t.co/1I1Qva32A6

Previous El Chapo Sentenced To Life In Prison Without Parole
Next GOP Rep. Matt Gaetz: The FBI Won’t File Charges For Death Threats Against Me Because I’ve Attacked Them