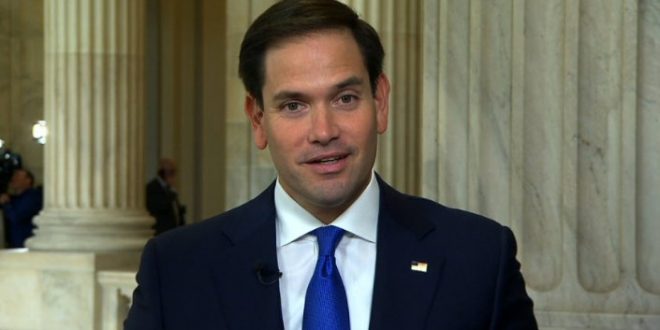 From the editorial board of the Miami Herald:

Witnessing Sen. Marco Rubio’s pathetic response last week to President Trump’s latest racist outrages, it is impossible now to believe that Florida’s senior senator was once hailed as “The Savior of the Republican Party” on the cover of Time magazine.

He has transformed from Trump critic to a sycophantic cheerleader — derided by former adviser and Washington Post columnist Max Boot as a “Trump fan-boy” — to the point that he’s willing to kill Obamacare even though his own state leads the nation in enrollment.

Even after Trump whipped a crowd in Greensville, North Carolina, into a hateful froth against U.S. Rep. Ilhan Omar that erupted in chilling chants of “Send her back! Send her back!” — Rubio couldn’t muster the courage to truly object to the horrifying display of blatant racism. How disappointing.

Previous WINNING: Chinese Investments In US Plummet 90%
Next Trump: I Could Win The Afghanistan War In A Week But I Just Don’t Want To Kill Ten Million People [VIDEO]