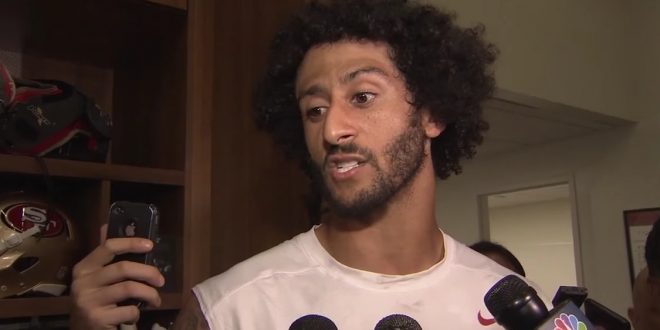 Former NFL star Colin Kaepernick did not look like himself in a fundraising email that was sent by the National Republican Congressional Committee on Wednesday. The message included a picture of Kaepernick that appeared noticeably altered to make his skin darker, an attack ad tactic that has been used before and is considered by many as racist.

One Democratic operative who saw the NRCC’s Kaepernick ad described it as “disgusting.” “House Republicans are running on racism, plain and simple. It’s disgusting, it’s offensive and it should be fireable, but there’s no accountability in the Republican Party,” the operative said.

“WHO DO YOU STAND WITH? DONALD TRUMP AND THE BETSY ROSS FLAG OR ANTI-AMERICAN FLAG COLIN KAEPERNICK?” the message asked.

Kaepernick is a flag?

Previous Fox News Analyst: Acosta Will Be Out By Tomorrow
Next Paul Ryan: I Retired To Get Away From Donald Trump