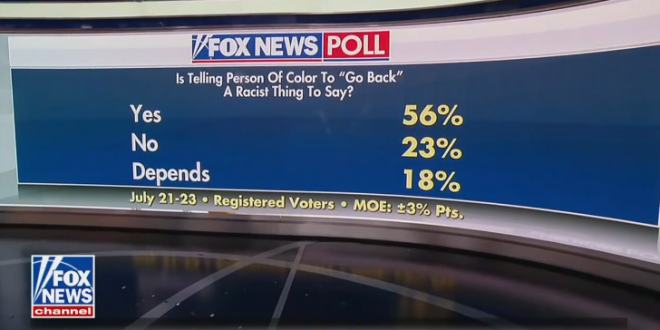 A new Fox News poll showed a large majority of Americans believe President Donald Trump‘s comments instructing four progressive Democrats to “go back” to unspecified countries were racist. 56% of all voters said that telling a person of color to “go back” is racist. 20% said it is not racist, and 18% say it depends. Among Republicans, 21% found it racist, 45% said it was not and 30% said it depends.

63 percent of registered voters say Trump’s “go back” tweets crossed the line, according to a new Fox News poll.

56 percent think saying “go back” to the country you came is a racist thing to say to a person of color.https://t.co/QsVTuzbMyH pic.twitter.com/WyMXy41VFb