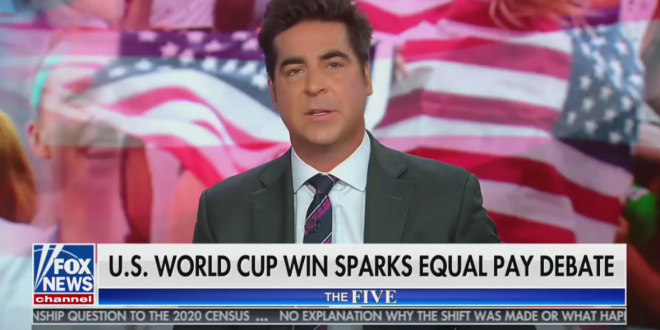 “If you look at the World Cup men’s revenue, it’s in the billions and they split up the pot. It’s a much bigger pot. Women’s World Cup revenue, much much smaller and they have a smaller pot to divide it up with. But the distinction is, is that the U.S. Soccer Federation, the women do actually make more revenue and they get paid less, so that’s their lawyer’s fault.

“They negotiated a horrible deal and they need to renegotiate that immediately. The point is, though, is that the women are not helping their case by their behavior. If you go out and you disparage the President and you act in unpatriotic ways and then complain about not getting paid equally, well, what do you think’s going to happen?” – Fox News host Jesse Watters, last night.

Previous Carlson: It’s Racist To Want Diversity In Congress
Next Miriam Adelson: The Bible Needs A “Book Of Trump”