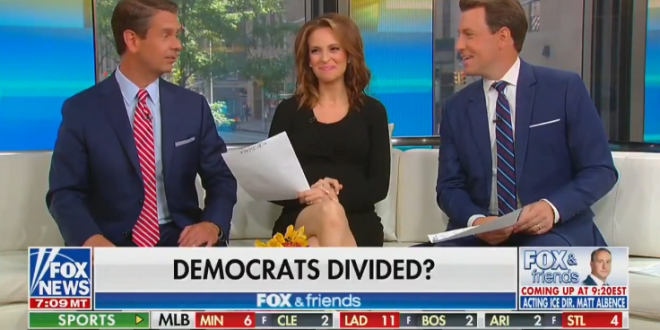 Following an earlier segment on Fox & Friends, Trump made bigoted remarks attacking Reps. Alexandria Ocasio-Cortez [D-NY], Ilhan Omar [D-MN], Ayanna Pressley [D-MA], and Rashida Tlaib [D-MI], telling them to “go back” to “crime infested places from which they came.” While many commentators noted the open racism of Trump’s remarks, Fox & Friends praised Trump for “making an important point,” even laughing along as they read what he wrote.

About 20 minutes before this morning’s grotesque Trump rant, Fox & Friends ran a segment about “the Squad” and aired comments Reps. Rashida Tlaib and Ayanna Pressley (both born in the U.S.) made at Netroots Nation.

Fox & Friends laughs while reading Trump’s bigoted “go back to Africa” tweets: Trump is “very comedic” and he is “making an important point” pic.twitter.com/T0mLYQxvmC