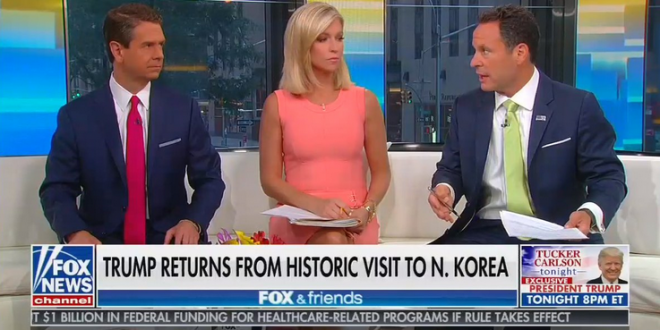 As the curvy couch covered Trump’s surprise meet-up with Kim Jong Un at the Korean DMZ, the show immediately cranked up the fawning to 11 by playing DJ Khaled‘s celebratory hip-hop anthem, “All I Do is Win.”

“​Was this the music blasting ​at the ​DMZ?” Brian Kilmeade asked. “Yes it was,” Ainsley Earhardt answered. She proceeded to call it a “huge win” for Trump as she remarked on how no sitting president has ever visited the country before.

“Listen, if any other president would have done it – let’s say it was Barack Obama – people would have called it ​​courageous​, ​the greatest feat of the 21st century,” said Griff Jenkins. “​But yet, that’s not what ​all the critics are saying.”

Fox News reporter: If Obama had done this, it would have been called “​t​he greatest feat of the 21st century” https://t.co/PtgkIEbz0e pic.twitter.com/aWEcpMsYRl