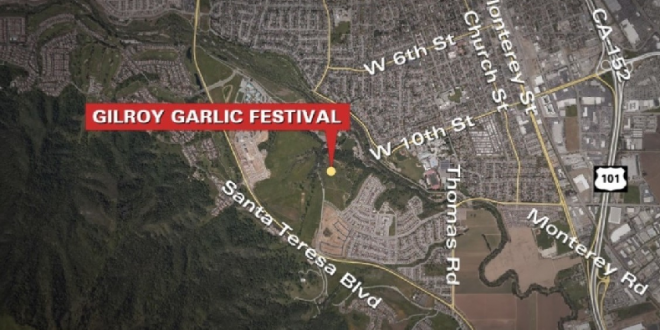 At least four are dead, 15 are injured and hundreds of others were sent scrambling for safety Sunday after at least one gunman opened fire in Christmas Hill Park during the last day of the Gilroy Garlic Festival, according to officials. A suspected gunman is dead.

Gilroy Police Chief Scot Smithee said the suspect gained entry into the festival by cutting a fence to circumvent security. Smithee said that law enforcement engaged with at least one suspect within a minute of the shooting, which appeared to be random. Police said there may be a second suspect connected to the shooting, but it was still unclear late Sunday evening.

The band Tin Man was performing an encore on stage at the festival when the gunman opened fire. Singer Jack van Breen said he saw a man wearing a green shirt and grayish handkerchief around his neck fire into the food area with what looked like an assault rifle.

The famous Californian food festival is held annually on the last weekend of July and was wrapping up its third and final day when the shooting reports came in. Videos purportedly taken at the festival show crowds of people running quickly away from festival tents while pops can be heard in the background.

Festival-goer Julissa Contreras told NBC Bay Area that she saw a man “rapid firing” with a gun: “I could see him shooting in just every direction. He wasn’t aiming at anyone specifically… He definitely was prepared for what he was doing.”

Another witness told the station that he felt a bullet whiz by his head. A third said he saw “quite a few” people on the ground, but wasn’t sure how many had been shot.

Save your “thoughts and prayers” without action, lawmakers.

If more guns and fewer gun laws made us safer, America would be the safest nation in the world. Instead, we have a 25 times higher gun homicide rate than any other high income country.