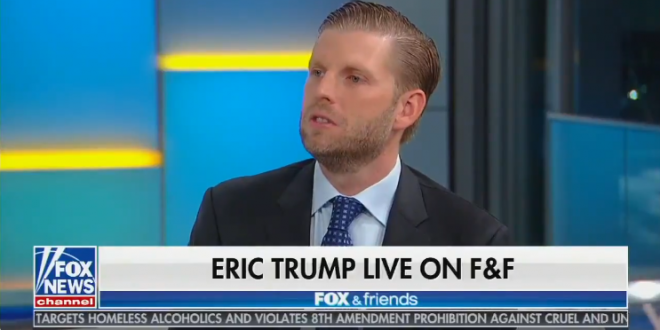 Eric Trump Predicts Run On Banks If Trump Loses: You Might As Well Hide All Your Money Under The Mattress

Eric Trump defended his father President Donald Trump on Fox & Friends Wednesday morning, and while the full-throated defense of the controversy surrounding racist tweets from the weekend, a surprising thing happened: host Steve Doocy challenged his guest on the role that President Trump played in this, asking “was that appropriate?”

Eric Trump, of course, responds by saying he loves the “get out” tweets, going on to call House Democrats anti-Semitic. See the second clip below for his claim about the banks.

On Fox & Friends, Eric Trump says ‘the squad’ “is the most hate-filled group I have ever seen before.” pic.twitter.com/0feywTQtyi

Eric Trump suggests a run on the banks if his father loses in 2020: “If one of these lunatics got into office, you watch what happens to the economy. You may as well pull your money out of the bank [and] hide it under the mattress. Our economy in this country would crater” pic.twitter.com/10VfZJPC25

Eric Trump claims that “95% of this country is behind” Donald Trump’s jingoist culture wars. pic.twitter.com/opT8pe4Iio

Globo reports US considering naming Eric Trump as ambassador to Brazil in “exchange” for Eduardo and – sorry – I don’t believe it for a second. Only quotes “Brazilian govt sources.” I will eat my shirt on 5th Ave if this happens https://t.co/XUGqaXDeTq