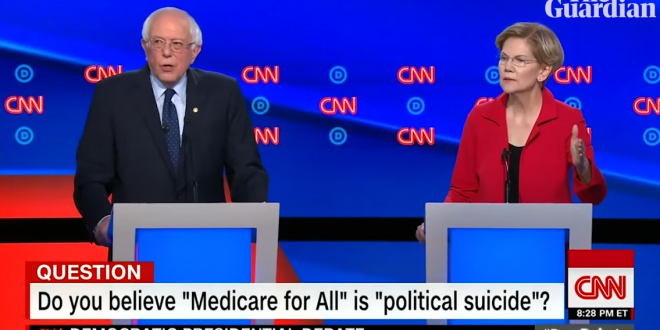 The leading liberals in the Democratic presidential primary, Senators Bernie Sanders and Elizabeth Warren, strenuously fought back on Tuesday against accusations of making fanciful promises and imperiling the party’s prospects against President Trump, as a group of moderate underdogs sought to slow their momentum in the second round of debates.

Tuesday night’s Democratic presidential debate in Detroit was widely expected to pit the two leading progressives in the field against each other. Instead, Sens. Bernie Sanders of Vermont and Elizabeth Warren of Massachusetts had each other’s backs in fending off the other eight aspirants onstage.

They gave as good as they got, and emerged at least as strong as either was going in. That was particularly good news for Sanders, who had been perceived as ceding ground to Warren in recent months.

The question of the night was not so much, “Who’s more progressive?” — it was more, “Can the Democrats win in 2020 running on their most progressive policies?” In the end, both questions were left hanging in the air: to be continued.

It came after a lengthy section in which the assembled candidates debated different health care plans that have no chance of passing given the composition of the US Senate, and then debated decriminalizing unauthorized border crossings, which they also don’t have the votes to do, and then debated a series of gun control ideas that would swiftly fall to a filibuster and, even if they didn’t, would plausibly be overturned by the Supreme Court’s conservative majority.

“This is a country that once changed its Constitution so you couldn’t drink and changed it back because we changed our minds, and you’re telling me we can’t reform our democracy in our time. We have to or we will be having the same argument 20 years from now.” 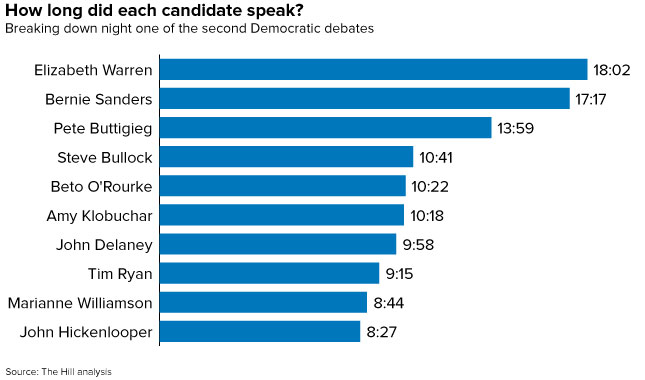 Previous CHATTER AWAY: Overnight Open Thread
Next Mayor Pete To Republicans: At The End Of Your Career, You Will Be Judged On Putting Trump Over America