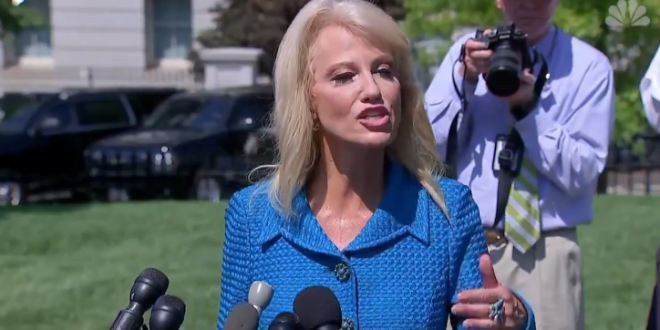 White House counselor Kellyanne Conway on Tuesday responded to questions about President Donald Trump’s attacks on four congresswomen of color by asking a reporter about his heritage.

Andrew Feinberg, a White House reporter for Breakfast Media, a website about politics and technology, asked Conway, “If the president was not telling these four congresswomen to return to their supposed countries of origin, to which countries was he referring?”

Conway paused and then asked him, “What’s your ethnicity?” “Why is that relevant?” Feinberg replied. “Because I’m asking a question. My ancestors are from Ireland and Italy,” Conway shot back.

JUST NOW: I asked @KellyannePolls, who’d just said @realDonaldTrump was not telling Omar/Tlaib/Pressley/AOC to go back to Somalia/Gaza/Puerto Rico/etc, which countries he was referring to.

She responded by asking me where my ancestors came from, thereby confirming what he meant

Kellyanne Conway just asked reporter @AndrewFeinberg “what’s your ethnicity” after he asked about Trump’s attack on Democratic congresswomen to “go back” to where they came from pic.twitter.com/dEdzxtycUN

“What’s your ethnicity?” Kellyanne Conway asks a reporter when the reporter asks her about the intent of the president’s tweets.

“A lot of us are sick and tired of this country – of America coming last, to people who swore an oath of office.” pic.twitter.com/XOypuqmA4H

Previous Federal Judge Bans Roger Stone From All Social Media But Imposes No Jail Time For Violating Her Gag Order
Next Mat Staver: The Q In LGBTQ Stands For Pedophiles