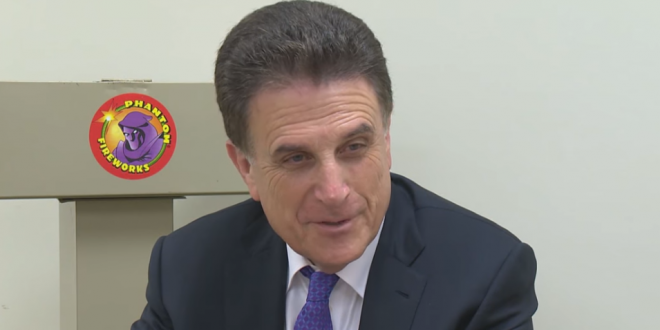 President Donald Trump’s Fourth of July celebration will feature $750,000 of donated fireworks from an Ohio retailer who has lobbied the White House against expanded tariffs on Chinese imports.

And last week, the same day the donation was announced, the company — Phantom Fireworks of Youngstown, Ohio — got what it wanted: Trump decided to hold off on his threatened $300 billion in tariffs on Chinese goods, which include fireworks.

“This is another example of how private companies attempt use their money to influence the government by stroking the president’s ego,” said Jordan Libowitz with Citizens for Responsibility and Ethics in Washington, a nonpartisan watchdog group.

Phantom Fireworks boss Bruce Zoldan [PHOTO] made his case to Trump in a private May 22 meeting with other business executives in Washington. In a statement to WTOP, Zoldan confirmed the meeting and said he “did not specifically discuss fireworks or address the topic of fireworks and tariffs.”

Fireworks companies say tariffs in the escalating trade war with China will make fireworks more expensive for consumers, local and federal agencies. They say their products can’t be easily produced outside of China, mostly due to stricter U.S. regulations on the volatile chemicals that go into them.