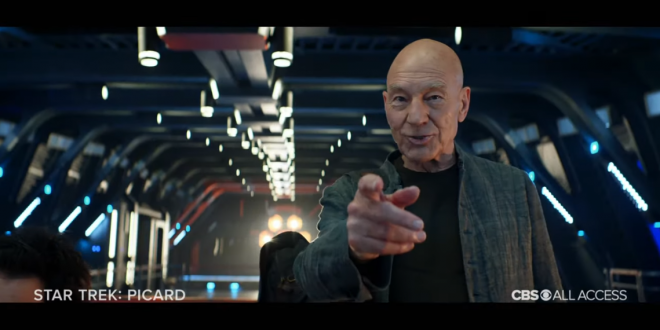 All eyes were on San Diego Comic Con’s Star Trek panel this year, as anticipation continues to build for Star Trek: Picard, the first Trek entry to feature Sir Patrick Stewart since the 2002 film Star Trek: Nemesis. And on Saturday, the series’ handlers at CBS didn’t disappoint.

A whopping two-minute trailer went well past “teaser” status with a smorgasbord of story, action, and detail for this CBS All-Access exclusive, all clarifying what little we knew from the first teaser in May. Picard’s retirement to a vineyard was further clarified: it came, in part, because “Commander Data sacrificed his life for me.”

Fret not, Trekkies. The legendary leader of the starship Enterprise quickly finds a reason to return to space. “These past few years, I really tried to belong here,” Picard says in the trailer, 20 years removed from the events of the series “Star Trek: The Next Generation.”

His restless retirement is disrupted by a young woman (played by Isa Briones) who he believes is in “serious danger.” His mission to keep her safe leads him back to Starfleet to command a new crew that includes Alison Pill and Santiago Cabrera.

‘Star Trek: Picard’ Will See the Return of Brent Spiner as Data, Jeri Ryan as Seven of Nine and More ‘Next Generation’ Veterans [Comic-Con 2019] https://t.co/GxTFQvT4GV pic.twitter.com/gilEUowHbV

‘STAR TREK: PICARD’ Is Officially Bringing Back DATA, SEVEN OF NINE, and the BORG https://t.co/QoJ6dN0r1k pic.twitter.com/RLouY5dB5f