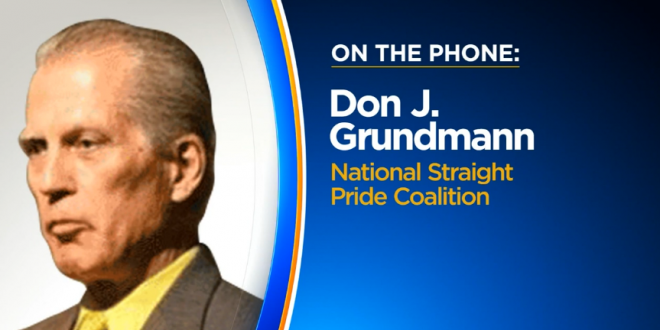 Plans for a Straight Pride Parade take a major step forward in Modesto. The city is now considering giving organizers a permit for that event. A flyer circulating on social media advertises Stanislaus County will host the straight pride event in Modesto’s Graceada Park Aug. 24.

The permit hangs in the balance. The man behind it is Don Grundmann of the National Straight Pride Coalition. He says the parade event is his group’s cultural answer to their opponents.

The purpose/mission of the California Straight Pride Coalition is to defend the children noted above and all current and future generations of all races and colors from being destroyed by the inherent malevolency/evil of the Homosexual/Sodomy Movement toward our founding principles as noted below.

Heterosexuality – the natural biological foundation for human life and its continuance and the ground upon which all civilization is built;

The supremacy of the Natural Nuclear Family of man, woman, and children: the unquestionable superior method/structure/institution by which to raise children who are, “normal, natural, healthy, sane”

Western Civilization (“the West is the Best”) – the Christian religion based social, cultural, and national cornerstone upon which the mass majority of all progress of humanity; i.e.; the modern world; has been built;

Whiteness/Caucasian – the mass majority biological racial component of the developers of western civilization;

Christianity – the religious foundation of the formation, development, and advancement of Western Civilization;

Nationalism – the patriotic love of their nation and its interests, principles, and future that motivated the formulators of and in the development of Western Civilization.

At the second link above you’ll find lots more Christian Nationalism hooey about the coming war against sodomites.