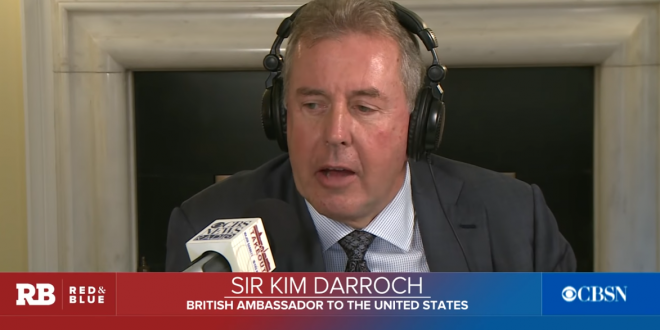 British Ambassador To US Resigns After Trump Attacks

Britain’s ambassador to the US, Kim Darroch, has announced he will resign over leaked comments in which he criticised Donald Trump.

In a letter to the Foreign and Commonwealth Office, Sir Kim wrote: “Since the leak of official documents from this Embassy there has been a great deal of speculation surrounding my position and the duration of my remaining term as ambassador. I want to put an end to that speculation. The current situation is making it impossible for me to carry out my role as I would like.

“Although my posting is not due to end until the end of this year, I believe in the current circumstances the responsible course is to allow the appointment of a new ambassador.

The wacky Ambassador that the U.K. foisted upon the United States is not someone we are thrilled with, a very stupid guy. He should speak to his country, and Prime Minister May, about their failed Brexit negotiation, and not be upset with my criticism of how badly it was…

…handled. I told @theresa_may how to do that deal, but she went her own foolish way-was unable to get it done. A disaster! I don’t know the Ambassador but have been told he is a pompous fool. Tell him the USA now has the best Economy & Military anywhere in the World, by far…

….and they are both only getting bigger, better and stronger…..Thank you, Mr. President!