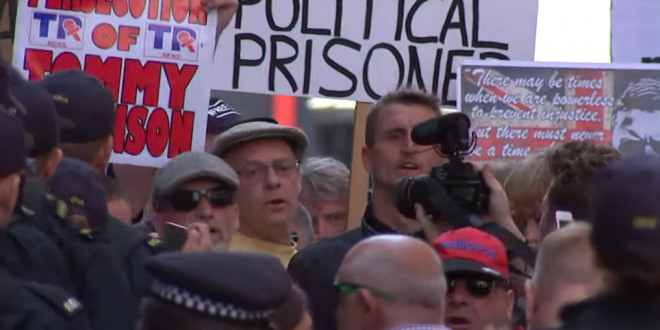 Tommy Robinson has been jailed for nine months over contempt of court. The ex-English Defence League leader was found guilty last week of interfering with the trial of a sexual grooming gang at Leeds Crown Court in May 2018.

Two Old Bailey judges said his Facebook Live video of defendants in the trial had encouraged “vigilante action”. A social media account in Robinson’s name called the sentence an “absolute joke” and said it was time to protest.

Outside the London court, supporters of Robinson, whose real name is Stephen Yaxley-Lennon, booed as news of his sentence reached them. The crowd marched towards the Old Bailey chanting “we want Tommy out” before some began pelting police with bottles and cans.

Yesterday Robinson appeared on Infowars to beg Trump for asylum because he claims to fear that Muslims will murder him in prison.

Last year the Trump administration’s “Ambassador for Religious Freedom” Sam Brownback lobbied Britain for Robinson’s release after he was first jailed for disrupting the trial cited above.

Robinson is a cult hero among the US far-right and has appeared on Tucker Carlson’s show to promote his white nationalist beliefs.

Robinson has accumulated several criminal convictions and has served three prison sentences. His criminal record includes convictions for violence, financial and immigration frauds, drug possession, public order offences, and contempt of court. He has served at least three separate custodial sentences: in 2005 for assault on a police officer, in 2012 for using false travel documents, and in 2014 for mortgage fraud.

Fellow far-right extremist Katie Hopkins, who was retweeted this morning by Trump, accompanied Robinson to court. Following the sentencing, Robinson’s supporters attacked reporters and the police and burned the EU flag.

Police move in as ‘Tommy Robinson’ supporters attack BBC broadcasters on college green. Chants of “We want our country back” pic.twitter.com/CaZszLxqVl

Now gathering outside the House of Lords Old Palace Yard entrance. Man on loudhailer tells supporters to “spread out. Fill the square. Bring this place to a standstill” pic.twitter.com/dUuXXO3G3n

Previous Paul Ryan: I Retired To Get Away From Donald Trump
Next Christian Activist David Barton: There Will Be Civil War If SCOTUS Reverses Roe And Blue States Will Secede