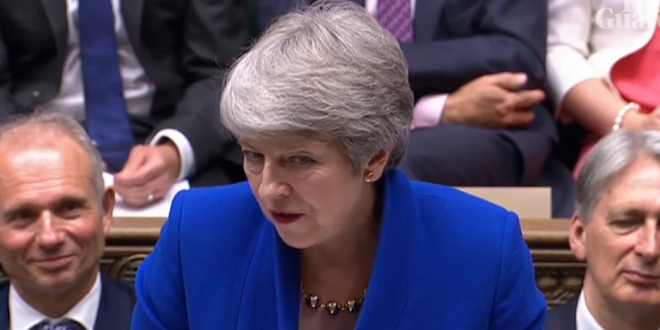 With her last parliamentary session in the books, Theresa May has arrived back at Downing Street — her home for a few more minutes. Soon, she is expected to make her final statement as prime minister. This will be her last attempt to shape her political legacy while in office — so expect her to set out what she feels were her biggest accomplishments, and try to explain where it all went wrong with Brexit.

After that, she’ll get back into her car and head to Buckingham Palace, where she will officially tender her resignation to the Queen. Tradition dictates that the outgoing PM then recommends to the monarch the person who will lead the next government. (And unless she’s planning on causing a rather sizable constitutional crisis as her last act, that person will be Boris Johnson.)

Theresa May gets a standing ovation as she leaves the UK House of Commons for the last time as Prime Minister https://t.co/JUSA3Wy42w pic.twitter.com/BVpDazJrhB

.@theresa_may last ever remarks to @jeremycorbyn at #PMQs. “He and I are very different people…What we have in common is our commitment to our constituencies. As a party leader who has accepted when her time is up, perhaps the time has come for him to do the same”. Wow

Previous Joe Biden: Nobody Thought Trump Would Be This Bad
Next Giuliani Appears On Fox With Dyed Hair & Eyebrows