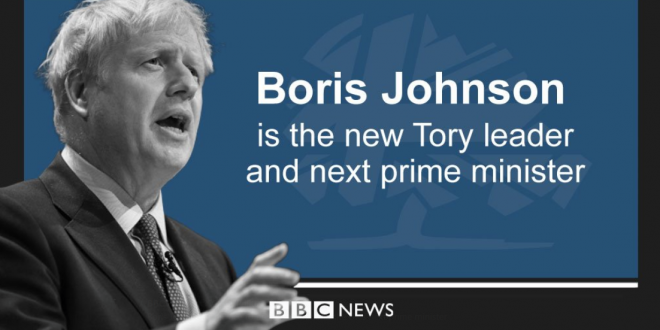 BRITAIN: Boris Johnson Wins Battle To Be Next PM

Boris Johnson succeeded Theresa May as Britain’s new prime minister on Tuesday and the incoming leader faces a bumpy ride amid pressure to get the nation’s stalled exit from the European Union – known as Brexit – over the line. Britain’s 77th prime minister will also have to deal with an escalating crisis with Iran.

American-born Johnson, 55, becomes Britain’s 14th prime minister to serve under the reign of Queen Elizabeth II, and the third leader from the country’s Conservative Party, including David Cameron – who called 2016’s controversial referendum on EU membership – charged with delivering Brexit.

Johnson won a weeks-long contest decided by an internal party vote by 160,000 Conservative Party members after May stepped down over her handling of Brexit. Britain elects a party, not a leader, meaning the ruling party can change its leader.

Boris Johnson is asked to give an example of a time when he’s put his own self-interest aside for the benefit of the country and the only example he can (eventually) think of is that if he wasn’t in politics he’d be even more loaded than he is as an MP .pic.twitter.com/TsKZpW3ael

Boris Johnson has won the support of fewer than 100,000 unrepresentative Conservative Party members by promising tax cuts for the richest, presenting himself as the bankers’ friend, and pushing for a damaging No Deal Brexit.

But he hasn’t won the support of our country.

Boris Johnson wins race to be Tory leader and the UK’s next prime ministerhttps://t.co/V3Syo3N8Cc #NextPrimeMinister pic.twitter.com/tOiTrZHjp3