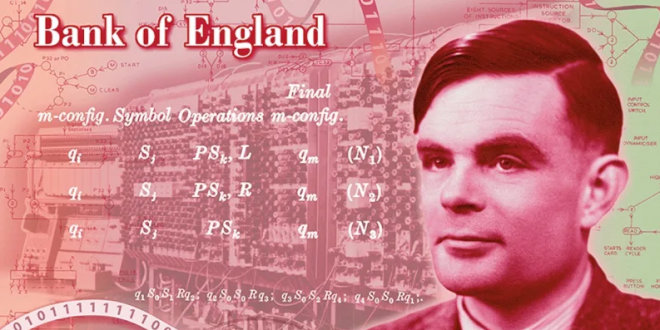 Alan Turing, the scientist known for helping crack the Enigma code during the second world war and pioneering the modern computer, has been chosen to appear on the new £50 note.

The mathematician was selected from a list of almost 1,000 scientists in a decision that recognised both his role in fending off the threat of German U-boats in the Battle of the Atlantic and the impact of his postwar persecution for homosexuality.

The announcement by the Bank of England governor, Mark Carney, at the Science and Industry Museum in Manchester completes the official rehabilitation of Turing, who played a pivotal role at the Bletchley Park code and cipher centre.

The note’s design reflects Turing’s work. It features a ticker tape of binary code that spells out his birthday (June 23, 1912), and depicts the “British Bombe” machine that helped break the Enigma code.

It also includes a quote Turing gave to The Times newspaper in 1949: “This is only a foretaste of what is to come, and only the shadow of what is going to be.”

Supporters have long campaigned for Turing to receive greater recognition for his work and official acknowledgment that his conviction for homosexual activity was wrong.

Alan Turing, World War Two codebreaker and mathematician, will be the face of new Bank of England £50 note https://t.co/YpRMivamd2

We’re delighted that Alan Turing has been chosen by the @bankofengland as the face of the new £50 note.

Turing was the father of modern computing, a pioneer in #artificialintelligence and instrumental in the breaking of Enigma @bletchleypark during #WWII#Turing50 pic.twitter.com/raRGoBtogx