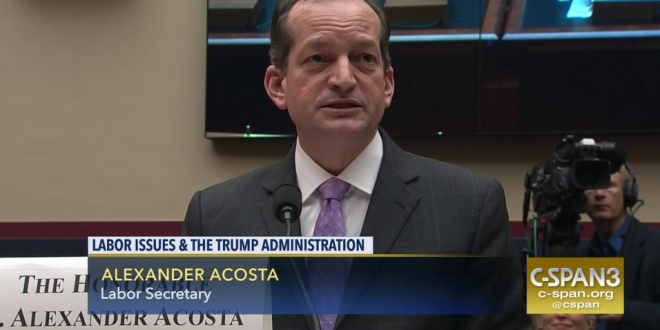 Labor Secretary Alexander Acosta resigned amid the controversy surrounding his handling, as an assistant U.S. Attorney, of the 2008 prosecution of billionaire Jeffrey Epstein for sex crimes.

Democrats have argued that Acosta went easy on Epstein, a politically connected donor who was indicted on sex-trafficking charges on July 8. Acosta has defended his management of Epstein’s plea deal, arguing he got a tougher sentence for Epstein than what the government had initially sought a decade ago.

The plea deal resulted in Epstein’s conviction on two counts of prostitution and 13 months in county jail. Epstein had previously faced a 53-page federal indictment.

Labor Secretary Alex Acosta is resigning, effective one week from today, he announces. We reported yesterday Trump was questioning his performance. https://t.co/e7j3vQdv9Q

Alex Acosta is out, Trump says. POTUS says it was Acosta’s decision to resign as Labor Secretary. Appearing together on South Lawn.