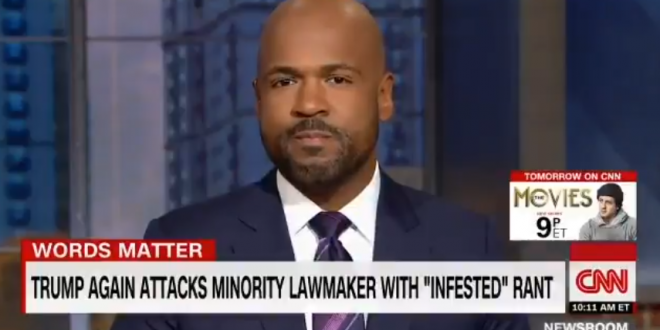 “Infested. That’s usually reserved for references to rodents and insects, but we’ve seen the president invoke infestation to criticize lawmakers before. Donald Trump has tweeted more than 43,000 times. He’s insulted thousands of people — many different types of people. But when he tweets about infestation, it’s about black and brown people. The president says about Congressman Cummings’ district that no human would want to live there.”

“You know who did, Mr. President? I did From the day I was brought home from the hospital, to the day I left for college. And a lot of people I care about still do. There are still challenges, no doubt. But people are proud of their community.

“I don’t want to sound self-righteous, but people get up and go to work there, they care for their families, they love their children who pledge allegiance to the flag, just like people who live in districts of congressmen who support you, sir. They are Americans, too.” – CNN host Victor Blackwell, in an emotional response to Trump’s latest racist tirades.

Watch and listen to this entire video—all 2 minutes and 40 seconds of it. Thank you for your powerful words, @VictorBlackwell. pic.twitter.com/e05x4Zja6F