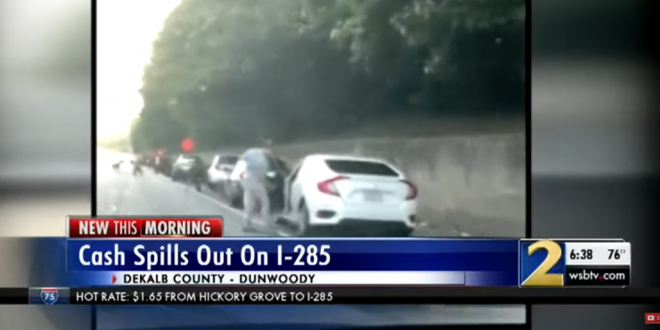 Weird things have spilled on Atlanta interstates before — foam tomahawks, produce and a whole mess of livestock, to name a few — but no spill has been as lucrative as the one on I-285 Tuesday evening.

An armored truck was driving in the westbound lanes near Ashford Dunwoody Road when a side door flew open, loosing its contents onto the interstate. Cash was all over the road, according to one driver who called into WSB Radio.

By the time Dunwoody police arrived around 8 p.m., all of the opportunists were gone. But, as it turns out, even money you find on the side of the highway isn’t free. Police are asking all of the drivers who took advantage of the “isolated cash storm” to return the money, which could be upward of 15 people.