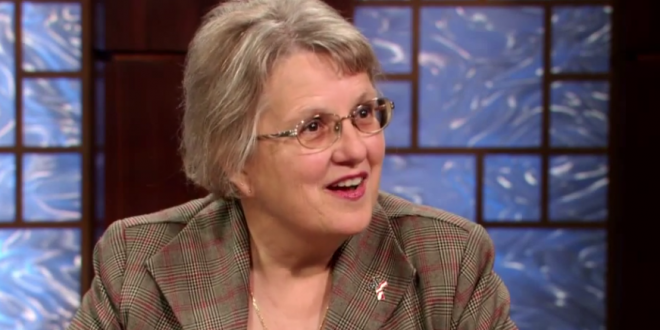 Former Arizona Superintendent of Public Instruction Diane Douglas is taking criticism over a Facebook post she made Wednesday that associated a transgender pride flag with pedophilia and blasted two public officials. Douglas later said she had mixed up the blue and pink transgender pride flag, which was briefly displayed at the Capitol, with a flag reportedly adopted by MAPs, or “Minor Attracted Persons.”

The concept of MAPs and its flag is actually a social media hoax. Anti-LGBTQ trolls continue to push the long-disproven idea that homosexuality and pedophilia are somehow connected. She then accused Secretary of State Katie Hobbs of displaying “the pedephilia flag” at the state Capitol last week along with “the homosexual flag” and alleged that the LGBTQ movement’s next advocacy efforts will be focused on pedophilia and incest.

Don’t doubt for one second that part of the “medically & scientifically accurate” comprehensive sex ed being pushed by [Kathy] Hoffman and her ilk is to get kids to be accepting of sex with adults. Katie Hobbs had the “pedephilia flag” (very similar to the one in this article) displayed on the Capitol building last week along with the homosexual flag. LGBT, next on the list for acceptance is pedaphilia then incest. Leave our children OUT of your sex life and sexual agendas.

So, I stand corrected. While the flag in the article and the one displayed by Katie Hobbs on the Capital are very similar (I’d never seen either one before the picture at the Capital or in the article) they represent different groups. The one at the Capital is the “transgender” flag – thought that’s the “T” in the LGBT “rainbow” flag but apparently there is another flag. Nonetheless I stand by my original sentiments – stay AWAY from our children and keep the symbols of any and all specials interests off our Capitol.

Douglas last appeared on JMG last year when she tapped a “dinosaurs were on Noah’s Ark” creationist to revise the state’s education curriculum. Two months later she was voted out of office and replaced by Democrat Kathy Hoffman.