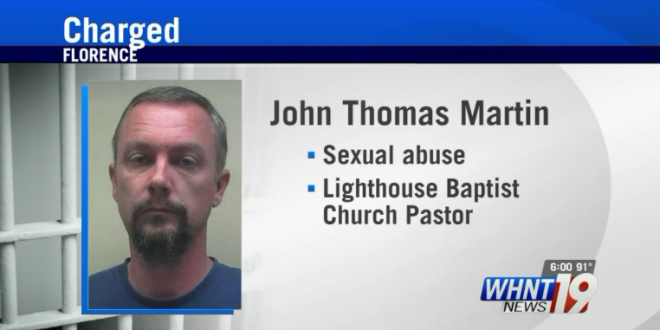 The lead pastor of a Florence church has been arrested, accused of sexually abusing young boys in his congregation. John Martin was taken into custody Friday evening and booked into the Lauderdale County Detention Center on four counts of Sexual Abuse.

Martin has been a pastor at Lighthouse Baptist Church on Sweetwater Avenue for nine years. He has since resigned from his position as pastor.

The arrest came less than a week after prosecutors say he confessed to his congregation at Lighthouse Baptist Church of inappropriate behavior.

The Lighthouse Baptist Church in Florence is an extremely socially conservative church, according to its website, that encourages men to “dress in shirts and ties, while our ladies wear modest skirts and dresses.” The church has also a very negative view of same-sex relationships.

“We believe that God has commanded that no intimate sexual activity be engaged in outside of a marriage between a man and a woman. We believe that any form of homosexuality, lesbianism, bisexuality, bestiality, incest, fornication, adultery, and pornography are sinful perversions of God’s gift of sex.”

A picture on the church’s website shows the pastor with what appears to be his family: his wife, two young daughters and three sons.

Previous McConnell Wades Into Flag Shoes Flap: I Want A Pair
Next Trump Claims Main Cost For His Ego Rally Is “The Fuel”