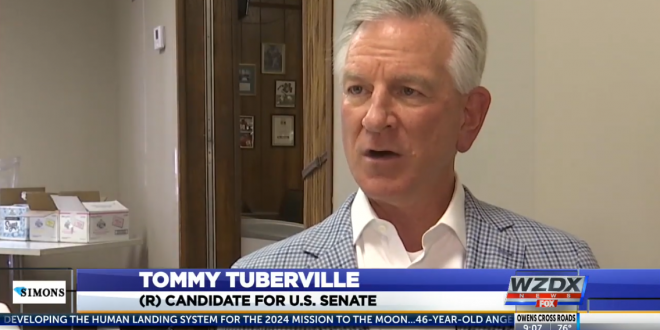 ALABAMA: GOP Senate Candidate Says We Must Put Jesus First Because He Gave Us The Gift Of Trump

Former Auburn University football coach Tommy Tuberville told Republicans at a campaign stop in Montgomery today that he would not take a paycheck if he’s elected to the U.S. Senate and would help President Trump fix problems Tuberville said result from a departure from Christian values and practices such as school prayer. “I’m a politician’s worst nightmare. I don’t need the money, I don’t need the job and I ain’t going to be politically correct,” Tuberville said, drawing applause.

Tuberville returned several times to the theme that a belief in God is essential to fixing what he believes are the nation’s pressing problems. He received applause and an amen or two when he said he believes the Trump presidency was a gift from God. “I want to help Donald Trump and you get this mess straightened out,” Tuberville said. “And I’m going to do that. But we’ve got to put Jesus and God before everything else. And if we don’t do that we’re going to be brought down to our knees again.”