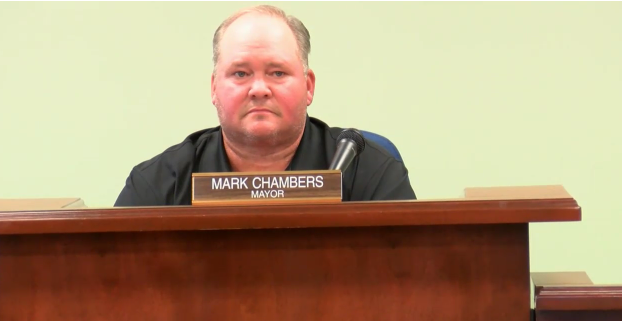 Two leaders of an Alabama city have resigned after their mayor posted a comment on Facebook about “killing out” socialists, “baby killers” and gay and transgender people. But mayor Mark Chambers refused to step down and told residents of Carbon Hill he plans to run for re-election.

Protesters lied down in a “die-in” and then confronted Chambers during Monday’s meeting, where he sat between two empty chairs.

Some asked just how he would like to kill them. One carried a sign saying “if you kill me, my ghost will haunt you.” The meeting soon ended, with Chambers walking out past a gantlet of people calling for him to resign.

As I reported last month, Chambers initially denied making the post and hung up on the local newspaper. He called back minutes later to admit to writing it, but said it was meant for friends and is being taken out of context. See the die-in protest in the video below.

Monday night’s Carbon Hill City Council meeting ended in an eruption of chants calling for the resignation of Mayor Mark Chambers in the wake of anti-LGBT statements he made on Facebook. https://t.co/GNz6ye4tlU