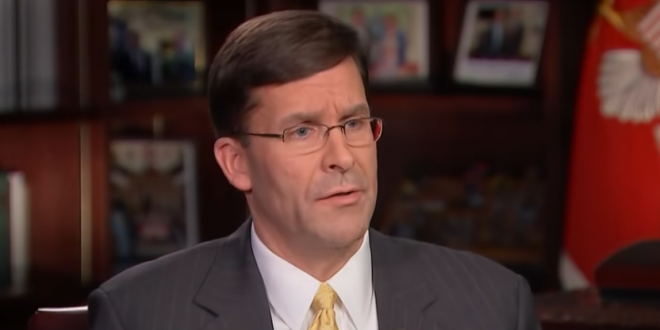 Acting Defense Secretary Mark Esper has proposed new exceptions from a pledge to recuse himself from decisions involving his former employer Raytheon Co., reflecting his move to the top of Pentagon decision-making.

Esper, who was the defense contractor’s chief lobbyist before coming to the Defense Department, sold his Raytheon stock in early 2018 under an agreement reached with the Office of Government Ethics when he became Army secretary the previous year. He’s still entitled to at least $1 million in deferred compensation after 2022 under that agreement.

But the new memo also provides for a waiver if a designated department official and an ethics officer agree that his participation in a matter that may directly affect Raytheon’s financial interests is “so important that it cannot be referred to another official.”

Among Raytheon’s many products are the famed Sidewinder and Tomahawk missiles, which can sell for over a million dollars each.