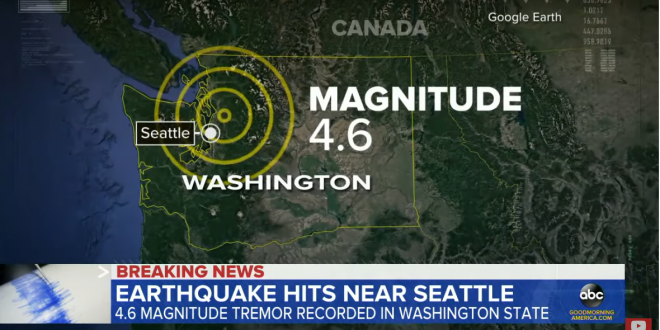 A magnitude 4.6 earthquake shook Seattle and the Puget Sound region just before 3 a.m. Friday morning, according to the United States Geological Survey.

The shaking emanated from Three Lakes, Wash., about 9 miles east of downtown Everett. The earthquake was relatively shallow, and originated about 14 miles beneath the surface, according to a USGS map.

A tsunami is not expected, according to a tweet from the U.S. National Tsunami Warning Center. A second quake, measured at magnitude 3.5, was reported near Monroe, Wash. a few minutes afterward.

It was only a 4.7, we gotta down play it or the other earthquake cities will think we’re not hardcore #SeattleEarthquake

Did you feel the earthquake in Seattle?? The whole @KING5Seattle building shook. #earthquake

DEVELOPING: A magnitude 4.7 #earthquake has struck about 1.2 miles north of Three Lakes, Washington, the USGS reports. Shaking was felt in the Seattle area. pic.twitter.com/5rRp5fU1Ua