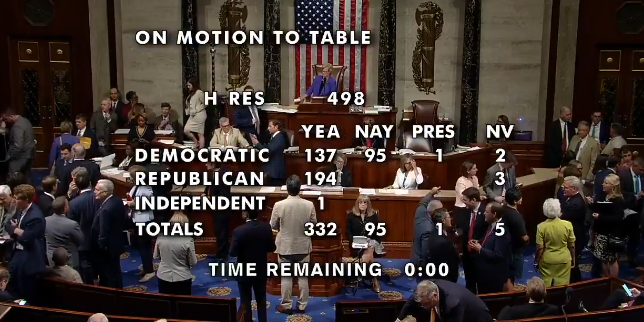 The House on Wednesday killed an attempt to impeach President Trump for statements that the chamber condemned this week as racist, turning aside an accusation that he had brought “ridicule, disgrace and disrepute” to his office.

But 95 Democrats signaled their support for impeachment, while 137 opposed it — a dramatic split signaling trouble ahead for a divided party.

The 332-95 vote to table the impeachment article drafted by Representative Al Green, Democrat of Texas, constituted the first action by the House since Democrats took control in January on a measure to impeach Mr. Trump, a significant move that Speaker Nancy Pelosi of California and other party leaders have toiled to avoid.

Previous GOP Senate Candidate Cites Women’s Soccer As An Example Of “Homosexual Activities” Ruining Television
Next Trump: “There’s A Lot Of Talk About The Fact” That Dem Rep. Ilhan Omar Was Married To Her Brother [VIDEO]