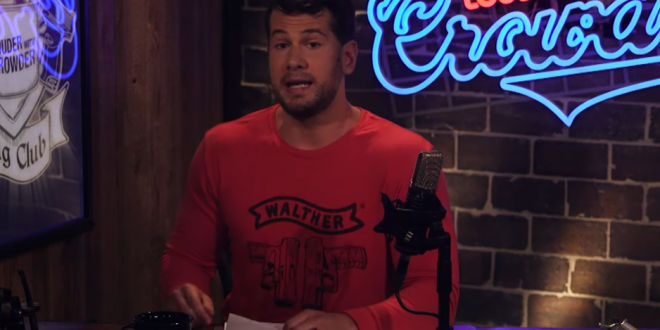 Carlos Maza, a video producer for the news site Vox, said the harassment began about two years ago. Steven Crowder [screenshot above], a right-wing commentator and comedian, had begun to call out Maza’s sexuality and his race — Maza is gay and Latino — in some of his videos on YouTube. And last week, Maza said, he finally grew sick of it. He edited a video of all the epithets that Crowder hurled at him over the last couple of years into a video and uploaded it to Twitter.

In an edited video compilation, Crowder calls Maza a “lispy sprite,” a “little queer,” “Mr. Gay Vox,” “Mr. Lispy queer from Vox,” “an angry little queer,” “gay Mexican,” “gay Latino from Vox,” and more. Crowder also breaks into a caricatured gay voice at points and appears to pantomime oral sex with his microphone. During one of the segments, Crowder wears a shirt that says “Socialism is for f–s.”

YouTube has at last formally responded to an explosive and controversial feud between Vox writer and video host Carlos Maza and conservative YouTuber Steven Crowder.

The verdict: YouTube says Crowder did not violate any of its policies, and that Crowder’s YouTube channel will stay up, despite his repeated homophobic slurs directed at Maza in videos posted to YouTube.

Notably, the company did not mention the phrase “hate speech,” indicating it does not seem to classify Crowder’s homophobic mockery as such.

YouTube’s hate speech policy page specifically bars “content promoting violence or hatred against individuals or groups” based on a number of attributes including ethnicity, race, and sexual orientation.

In a subsection, YouTube specifically writes creators cannot: “Use racial, ethnic, religious, or other slurs where the primary purpose is to promote hatred. Use stereotypes that incite or promote hatred based on any of the attributes noted above. This can take the form of speech, text, or imagery promoting these stereotypes or treating them as factual.”

Invoking hurtful stereotypes of gay men as effeminate to target a specific gay person, as well as disparaging references to that person’s ethnic background, seems about as straightforward a violation of this policy as can be.

On Monday, BlazeTV’s Steven Crowder published an “apology” video in response to Vox’s Carlos Maza triggering a YouTube investigation and the reported demonetizing of the conservative comedian for making jokes about Maza’s ethnicity and sexuality.

However, Crowder has seemingly rejected the general flow of Big Tech censorship sparked by the Left; instead of insincerely offering the societally required mea culpa, the comedian poured on the mockery in the faux apology video.

So, I have pretty thick skin when it comes to online harassment, but something has been really bothering me.

(1/4) Thanks again for taking the time to share all of this information with us. We take allegations of harassment very seriously–we know this is important and impacts a lot of people.

(2/4) Our teams spent the last few days conducting an in-depth review of the videos flagged to us, and while we found language that was clearly hurtful, the videos as posted don’t violate our policies. We’ve included more info below to explain this decision:

(3/4) As an open platform, it’s crucial for us to allow everyone–from creators to journalists to late-night TV hosts–to express their opinions w/in the scope of our policies. Opinions can be deeply offensive, but if they don’t violate our policies, they’ll remain on our site.

(4/4) Even if a video remains on our site, it doesn’t mean we endorse/support that viewpoint.

There are other aspects of the channel that we’re still evaluating– we’ll be in touch with any further updates.

It’s going to get so much worse now. @YouTube has publicly stated that racist and homophobic abuse doesn’t violate their anti-bullying policies. Crowder and his allies are going to be emboldened. I genuinely can’t imagine what LGBT employees at YouTube are doing right now.

We’ve all gotten so fucking used to how toxic and shitty @YouTube is. We all just accept that this is the way things are now.

But it doesn’t have to be. It’s toxic because YouTube let get this way, let bigots and alt-right creeps and shock jockeys take over. Its on them.

The important thing is this: @YouTube isn’t going to listen to cries for help.

They don’t give a shit about the the harm they’re doing to queer and marginalized people.

You have to raise hell. Use their platform against them. Hold them accountable for their neglect.

Note that the far-less-followed @TeamYouTube responded to @gaywonk to tell him to shove off, whereas the main @YouTube account is sending out rainbow-colored replies to LGBT content creators who aren’t asking the company about repeated anti-LGBT harassment. pic.twitter.com/4NaHbuJt0R

I have spent two years getting targeted by racist and homophobic abuse from one of @YouTube‘s star creators.