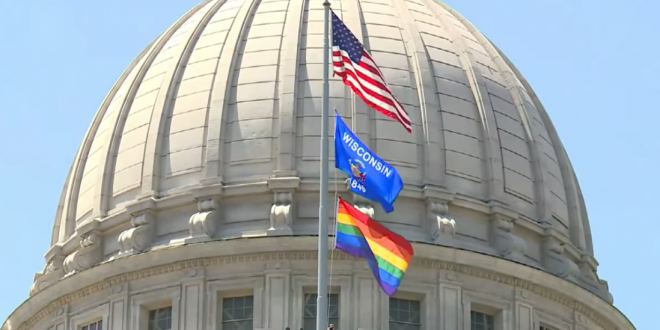 In a gesture that would have been unthinkable a year ago, Wisconsin Gov. Tony Evers Friday ordered a rainbow flag to fly above the state Capitol for the first time ever to mark Pride Month. One Republican state lawmaker responded with a tweet that appeared to question the move on religious grounds.

“Is this any more appropriate than erecting the Christian flag over the Capitol?” tweeted Rep. Scott Allen, R-Waukesha, who also invoked the “#religious” hashtag. Allen, whose Twitter bio describes him as a “Child of God,” didn’t immediately respond to a message asking him to explain the tweet.

But he had this response to the Associated Press via Twitter: “It advocates a behavior or lifestyle that some Wisconsin residents may not condone. Therefore it is divisive.”

Is this any more appropriate than erecting the Christian flag over the Capitol? #religious https://t.co/r7o2vcZ401

Gay pride rainbow flag raised over Wisconsin state Capitol for the first time. Crowd watching below cheers as it goes up under U.S., state flags

⁦@GovEvers⁩ ordered it up to celebrate June as Pride Month pic.twitter.com/J4sQos2SN2