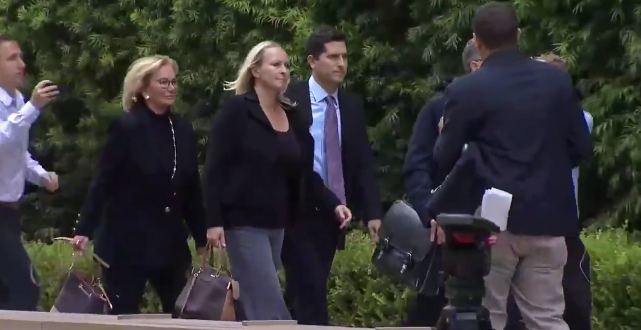 Rep. Duncan Hunter’s wife, who pleaded not guilty last summer along with her husband to charges of using more than $250,000 in campaign funds for their personal use, changed her plea to guilty in a hearing Thursday morning.

Attorneys for Margaret read a brief statement outside the courthouse after the hearing. She said in part: “I have fully accepted responsibility for my conduct” and “I understand that there will be more consequences.”

Duncan, 42, and Margaret, 44, are accused in a 60-count indictment of taking money from campaign coffers as if they were personal bank accounts and falsifying Federal Election Commission campaign finance reports to cover their tracks.

The attorney for Margaret Hunter says she apologizes for what she did and the people she let down @fox5sandiego pic.twitter.com/9vzGIVR08W

Rep Duncan Hunter’s wife just showed up at Federal Court. Possibly may be changing her previous plea. We will keep you posted on @fox5sandiego pic.twitter.com/csGXAtROff

Duncan Hunter says it’s “sad” that prosecuters were able to “bludgeon” his wife into submission.

But he says he hasn’t talked to his wife about her arrangement to cooperate with prosecutors, though he maintains they are not separated.