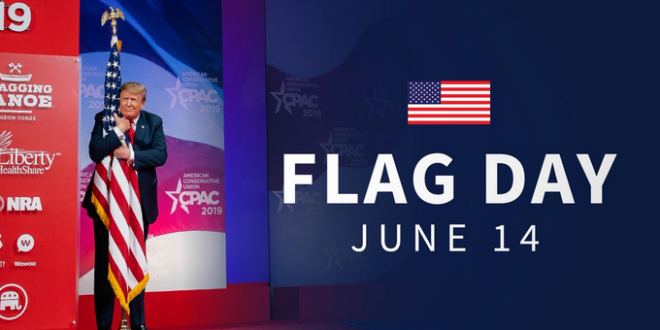 The White House celebrated Flag Day by tweeting out a photo of President Donald Trump pawing an American flag — and social media users were disturbed and disgusted. The holiday, which marks the adoption of the flag in 1777 by the Second Continental Congress, falls each year on Trump’s birthday.

The official government account tweeted out a photo of the president hugging a flag on the ad-festooned stage at this year’s Conservative Political Action Conference, where Trump delivered a lengthy and profane rant against his political enemies.

I know it’s asking a LOT from you folks in the @WhiteHouse, but please take down this picture. Dry humping the American flag is neither patriotic nor respectful to the flag.

I should be better than this but I laugh every time I see the photos of Trump hugging the flag and making his happy face. Planting a couple fast hideous kisses right there on the flag, holding it tight and rocking side to side, trying to find some way to grab the flag’s ass.

Fixed that for you pic.twitter.com/JSTeAEPpYr

And when you’re a star, the Flag let’s you do it.

Michael Cohen just wrote that flag a check for $130K.