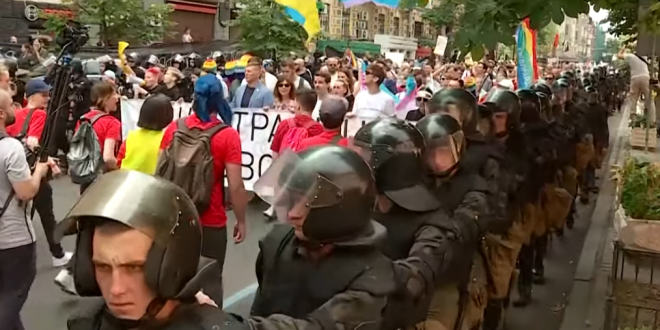 Ukrainian politicians and foreign diplomats joined thousands marching in a gay pride parade in Kiev on Sunday, the biggest and most peaceful ever in the former Soviet country. Crowds of people, many dressed in bright colours, paraded along streets in the centre of the Ukrainian capital, holding up banners saying “Diversity is beautiful”, “Human rights = happy country”, “No violence – yes rights!”.

They were flanked by a thick cordon of police in helmets but there was no sign of violence despite the presence of a few hundred protesters. Sunday’s march in Kiev was part of “Pride Month” celebrated by lesbian, gay, bisexual and transgender (LGBT) people around the world. Ukrainian President Volodymyr Zelenskiy, a former comedian who took office last month, has promoted a tolerant culture, saying he stands for all people’s equality and freedom.