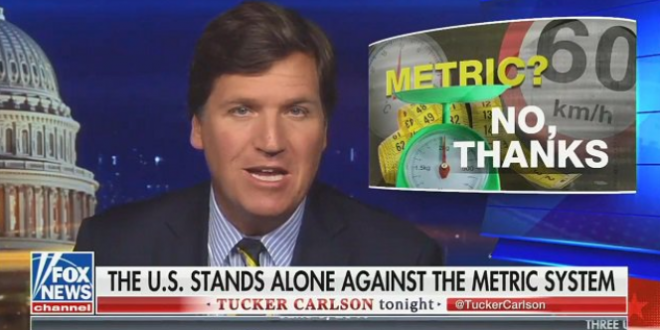 “Almost every nation on Earth has fallen under the yoke of tyranny — the metric system. From Beijing to Buenos Aires, from Lusaka to London, the people of the world have been forced to measure their environment in millimeters and kilograms. The United States is the only major country that has resisted, but we have no reason to be ashamed for using feet and pounds.” – Fox News host Tucker Carson, pronouncing it “kigh-lo-grams.”

god this shit fucking sucks so much pic.twitter.com/A4EtF4ylWi

Previous CHATTER AWAY: Overnight Open Thread
Next Trump: Republican Senators Have No Idea What They’re Talking About When It Comes To Tariffs, Absolutely Not