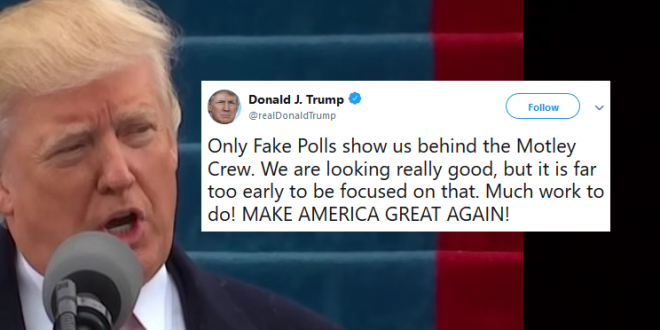 Glorious Leader’s latest nickname comes due to this:

For days, aides to Trump have tried to figure out whom to point the finger at over the leak of the data, which infuriated the president. In continuing to discuss it, aides violated a long-held unofficial rule of campaigns not to comment publicly on internal polling, even if the numbers leak.

The resulting furor led to an effort by the campaign manager, Brad Parscale, to tighten control. By removing several pollsters, the campaign hopes to shrink the circle of outside operatives who have access to information that could leak, according to the presidential adviser, who was not authorized to speak publicly.

The rupture of the team came as the president and his advisers are preparing for a rally in Orlando, Florida, on Tuesday night to formally open his campaign for a second term. Trump was hoping for a show of strength as Democrats draw increasing attention before their first debates on June 26 and 27.

Only Fake Polls show us behind the Motley Crew. We are looking really good, but it is far too early to be focused on that. Much work to do! MAKE AMERICA GREAT AGAIN!

So Glad the world is “respecting us” again!