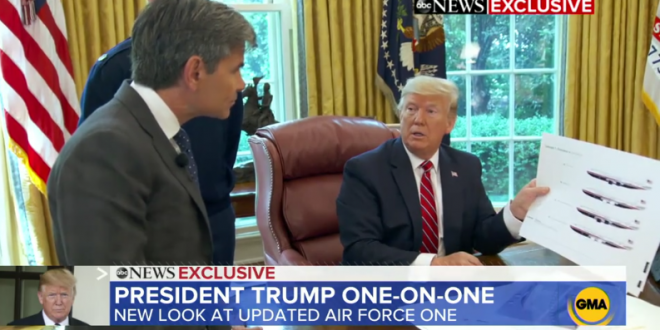 President Donald Trump unveiled his proposed changes to the presidential aircraft, including a new red, white and blue color scheme for the Air Force One jets that have maintained the same exterior visage for decades.

In an interview that aired Thursday on ABC’s “Good Morning America,” the president gave host George Stephanopoulos a peek at his new plans, which Stephanopoulos said Trump claimed to have designed himself.

The jet’s sky blue and white paint is so iconic that its trademark coloring helped give away a surprise trip by the president and first lady to Iraq late last year. But the new plan, which incorporates red and navy blue into the color scheme, looks very similar to that of Trump’s personal plane.

His personal plane AND the long-defunct Trump Shuttle.

Trump has just sanctioned a redesign of Air Force One to look like his private jet upside down. https://t.co/S1nnJJ32wI pic.twitter.com/0p5FDN1wwD

Trumps proposed new Air Force One colors is hmmm, I swear I’ve seen that before pic.twitter.com/1OLYzZGR9N

Previous Gallup: Slim Majority Back New Civil Rights For LGBTs
Next Lindsey Graham On Trump Accepting Dirt From Foreign Spies: “It’s A Mistake, I Don’t Want To Encourage This”