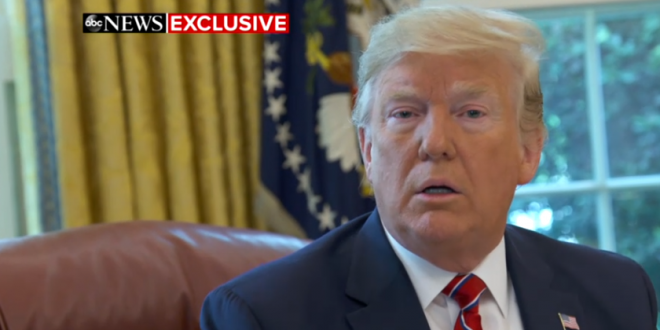 Trump Tells ABC News: If China Or Russia Offered Me Dirt On My 2020 Opponent “I Think I’d Take It” [VIDEO]

President Donald Trump may not alert the FBI if foreign governments offered damaging information against his 2020 rivals during the upcoming presidential race, he said, despite the deluge of investigations stemming from his campaign’s interactions with Russians during the 2016 campaign.

Trump disputed the idea that if a foreign government provided information on a political opponent, it would be considered interference in our election process.

EXCLUSIVE: Pres. Trump tells @GStephanopoulos he wouldn’t necessarily alert the FBI if approached by foreign figures with information on his 2020 opponent: “It’s not an interference. They have information. I think I’d take it.” https://t.co/7gvoAViw9r pic.twitter.com/k5Yqd9YxdC

On @CNN Trump to ABC News: “I think I’d take” information about 2020 opponent from foreign powers like Russia and China.

Trump: “I’ll tell you what, I've seen a lot of things over my life. I don't think in my whole life I’ve ever called the FBI. In my whole life. You don’t call the FBI. You throw somebody out of your office, you do whatever you do.”

Trump just told @GStephanopoulos he’d gladly take a foreign power’s negative info on his 2020 opponent if it was offered to him! He said “the FBI Director is wrong” that this wd be illegal. That’s the price we pay for refusing even to start an impeachment inquiry now. Grotesque.