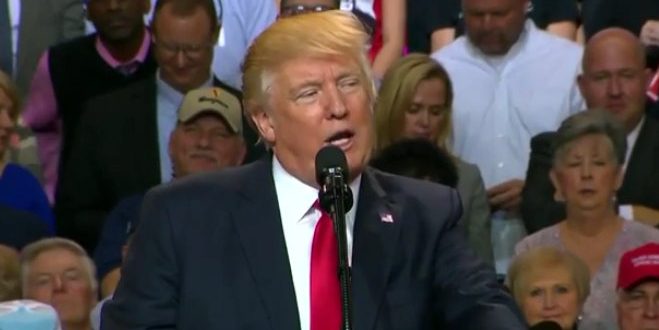 President Trump on Sunday evening retweeted a claim from user @TheRightMelissa that Big Tech companies like Twitter are “colluding with Democrats” to censor conservative content, which she alleged amounts to “fascism.”

In May, the White House launched a tool on that allows any U.S. citizen to submit a complaint if they think they were unfairly censored on social media platforms.

The user retweeted by Trump spends a lot of her time posting conspiracy theories and promoting far-right evangelicals. Oh, and she retweets videos of Hillary with devil horns.

For the few conservatives they have left on, twitter is engaged in shadow banning of conservative content. For example twitter has made it such that my followers will not see my tweets in trending topics. Big Tech is colluding with Democrats to shut down opposition. Fascism

You “love Jesus” but you promote the murder of babies in the womb? I know even Islam is vehemently against abortion.
You ma’am, are a phony & a fraud. You need to be investigated for not only campaign finance fraud but also immigration fraud for marrying your brother.

What we R witnessing in Europe & America is systematic take down of western civilization by the left through mass migration to overwhelm & break the system. If u think caravans from even Angola in Africa, are coming here organically think again. This is well funded plan. Wake up

Previous Giuliani Accuses “Over The Hill” Pelosi Of McCarthyism
Next POLL: Age Is A Bigger Negative Than Orientation