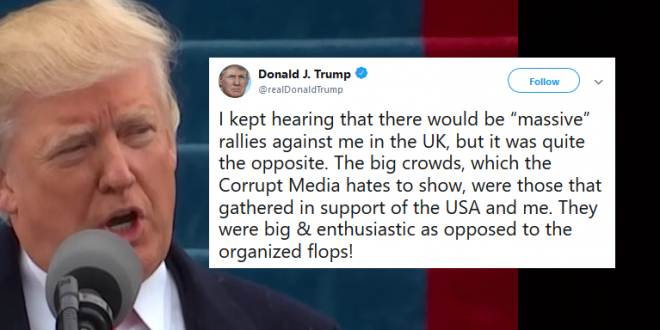 Donald Trump has suggested “big crowds” turned out to support him in London on Tuesday, while demonstrations held by opposition groups were “organised flops”. The statement, made in an early morning tweet on Wednesday, came after thousands took to the streets on the second day of the US president’s state visit.

After the march had finished, Scotland Yard said they would not provide an estimate for crowd sizes, but separately said they had deployed more than 3,000 officers for the event – and protestors easily outnumbered uniformed officers.

Organisers said the figure was close to 75,000. There were small pockets of pro-Trump fans wearing “Make America Great Again” hats and holding US flags, but these were vastly outnumbered by those opposed to the president, and there was no separate organised rally in support of Mr Trump.

I kept hearing that there would be “massive” rallies against me in the UK, but it was quite the opposite. The big crowds, which the Corrupt Media hates to show, were those that gathered in support of the USA and me. They were big & enthusiastic as opposed to the organized flops!

So much love for Trump!pic.twitter.com/sDP7morTo1

Wow such a tiny crowd of anti-Trump protestors!

You can barely see them!pic.twitter.com/PXfKSx7IDW

We lined the streets across the country to tell you to fuck off not welcome you#TrumpNotWelcome #TrumpUKVisit pic.twitter.com/vnUaG8UiVI