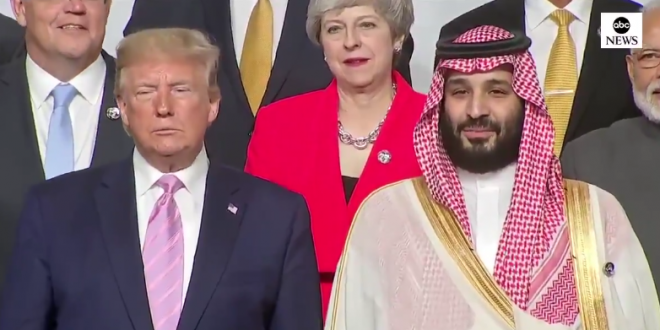 Trump Poses Next To Saudi Prince For G20 Group Photo

President Trump and Saudi Crown Prince Mohammad bin Salman posed next to each other for a photo of world leaders on Friday at the Group of 20 Summit in Japan, exchanging pleasantries in the process.

Trump and the crown prince could be seen making conversation and smiling as they stood next to each other for the “family photo” at the gathering of world leaders. Trump stood between the Saudi royal and Turkish President Recep Tayyip Erdogan.

President Trump walked side-by-side with Russia’s Vladimir Putin before posing for the family photo at the G-20 summit in Japan.

The president then stood next to Saudi Crown Prince Mohammed bin Salman for the photo. https://t.co/7IrHNqH9dx pic.twitter.com/A7Xcqzt7HE