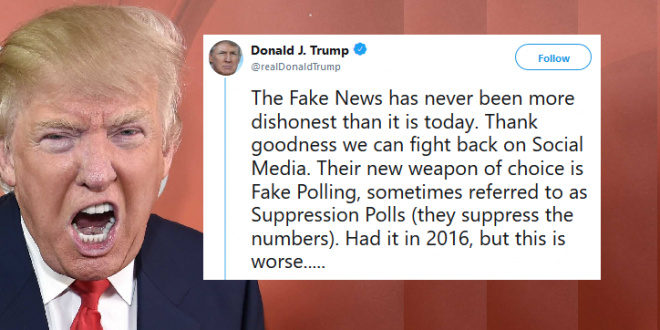 The president claimed that reports that polling within his campaign showed him trailing are untrue and said he has “the best numbers WE have ever had.”

As you may recall, during his testimony before Congress, Trump’s former lawyer Michael Cohen admitted to having rigged online polls to favor his boss back in 2015.

And just this week, Trump told his staffers to deny the leaked polls, which Sarah Sanders promptly did before the national media.

The Fake News has never been more dishonest than it is today. Thank goodness we can fight back on Social Media. Their new weapon of choice is Fake Polling, sometimes referred to as Suppression Polls (they suppress the numbers). Had it in 2016, but this is worse…..

…..The Fake (Corrupt) News Media said they had a leak into polling done by my campaign which, by the way and despite the phony and never ending Witch Hunt, are the best numbers WE have ever had. They reported Fake numbers that they made up & don’t even exist. WE WILL WIN AGAIN!

Previous Bernie: Trump Believes In Socialism For The Wealthy
Next Trump To Back Primary Challenger To Justin Amash