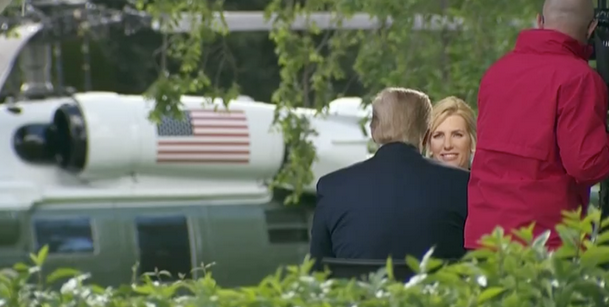 The ceremonies commemorating the 75th anniversary of D-Day Thursday morning were set to start sharply at 11:00 AM local time, but actually started 15 minutes later than planned. According to MSNBC White House reporter Hallie Jackson, President Donald Trump’s conversation with Fox News primetime host Laura Ingraham may be the reason for the delay.

Jackson noted via Twitter that a French feed revealed that Trump was sitting with Ingraham 14 minutes after the scheduled 11:00 AM start time, before noting an announcement declaring a 15-minute delay, suggesting that the delay was due to Trump’s conversation with the Fox News host.

French television cameras spotted President Trump sitting down with Fox’s Laura Ingraham – fourteen minutes *after* the ceremony in Normandy was set to begin. Thousands of people waited as an announcement overhead came on, declaring the program would be delayed until 11:15a.

President Trump began his day in Normandy sitting for an interview with Laura Ingraham on Fox (pic from Host TV): pic.twitter.com/9RXZiEp57B