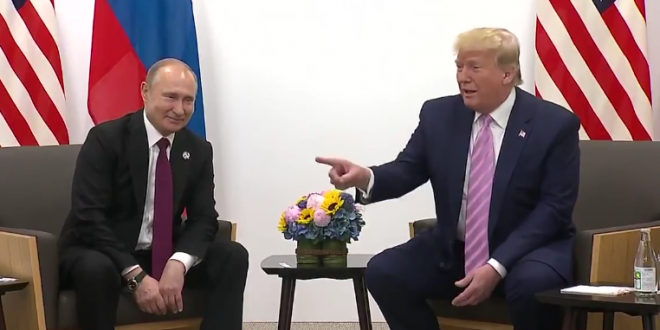 President Donald Trump insisted he did confront Vladimir Putin about the prospect of Moscow meddling in the U.S. 2020 election, following criticism of his light-hearted admonishment of his Russian counterpart at this week’s G20 Summit in Osaka, Japan.

Trump smirked when he waved his finger and said to Putin “don’t meddle in the election, please,” after he was asked by a journalist on Friday if he would warn the Russian president against any repeated effort to interfere in the future.

At a press conference on Saturday, a journalist told Trump that it “seemed like you didn’t mean it when you said yesterday, ‘Don’t meddle in our elections Mr President’, and then you guys started laughing.” Trump responded: “You have to take a look at the word. I did say it.”

Previous Trump Shrugs Off Climate Change At G20 Summit, Rips Wind Power As Unusable “When The Wind Goes Off”
Next Trump’s Hijacking Of DC’s Fourth Of July Celebration To Include VIP Ticketed Access For High Rollers And Family