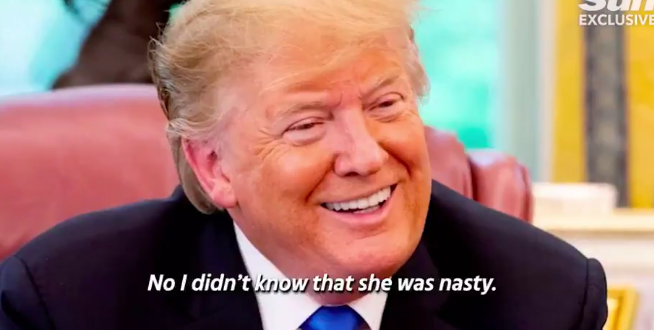 An official Twitter account for President Trump’s reelection campaign was mocked on Saturday after it pushed back on reports that Trump had said Meghan Markle, Duchess of Sussex, made “nasty” comments about him. “Here is what he actually said. Listen for yourself!” the account tweeted along with a captioned video.

Speaking to British tabloid The Sun ahead of his state visit to the United Kingdom, Trump can be heard saying he was not aware that Markle had called him “divisive” and “misogynistic” during his 2016 presidential campaign. “I didn’t know that. What can I say?” he told the paper. “I didn’t know that she was nasty.”

Fake News CNN is at it again, falsely claiming President Trump called Meghan Markle “nasty.” Here is what he actually said. Listen for yourself! pic.twitter.com/kLuPXBLMhf

FAKE NEWS is truly the ENEMY OF THE PEOPLE!

TFW when the quote you’re denying is in the audio you’re tweeting. https://t.co/iFu4IqaRys

This is a huge self own if I’ve ever seen one. pic.twitter.com/cIv7dxi5gf

Hard to imagine a more explicit example of gaslighting than this.

For the love of god. pic.twitter.com/xq1kIhF3Tb

They insist Trump never called Markle “nasty” and the proof is audio — and their own subtitles — showing he called her “nasty.” pic.twitter.com/X3ISM8XzA5