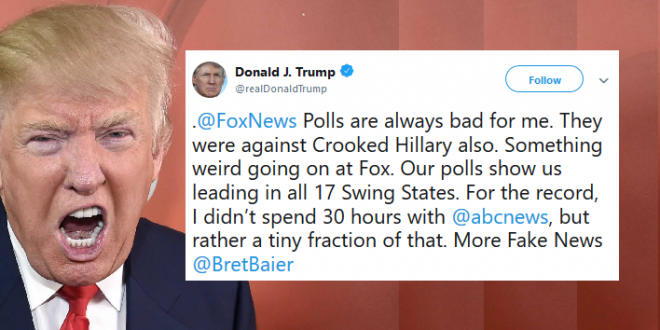 Trump Blows Up At Fox News Over Impeachment Poll

President Donald Trump took on the “fake news” again today. While that in itself hardly qualifies for a headline, this part of his tweet du jour (or du hour) does: It targets Fox News. The poll that elicited Trump’s friendly fire was released Sunday and reported today on Fox & Friends (one of said “friends” being the president, of course). It showed that 50% of respondents believe that POTUS should be impeached or removed from office. The president obviously was not amused.

.@FoxNews Polls are always bad for me. They were against Crooked Hillary also. Something weird going on at Fox. Our polls show us leading in all 17 Swing States. For the record, I didn’t spend 30 hours with @abcnews, but rather a tiny fraction of that. More Fake News @BretBaier

G’day! As much as we appreciate the shout-out, we think you meant @ABC? pic.twitter.com/GYwZKRVuya