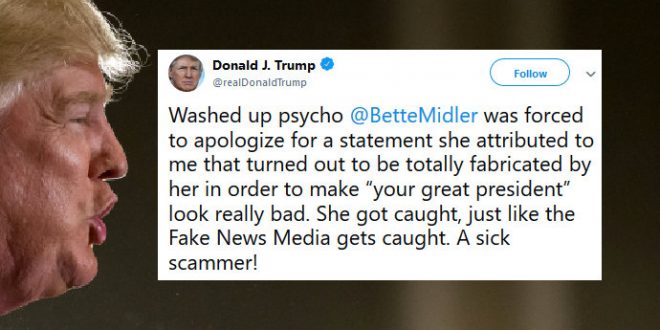 President Donald Trump took to Twitter Tuesday to call Bette Midler a “washed up psycho” after the actress tweeted a quote falsely attributed to him. Midler had earlier apologized on Twitter for sharing the fake quote, which called Republicans “the dumbest group of voters in the country.”

Midler hit back after Trump insulted her, saying that Trump is responsible for spreading lies.

It’s not the first time Trump has insulted the actress. He has in the past called her “extremely unattractive” and said that she “sucked.” Midler has been a vocal critic of Trump throughout his term, and has often taken to Twitter to share her opinions

Even when he’s correct about a false quote, Trump cannot resist lying. The meme Midler posted was not “totally fabricated by her” and has been floated around the web for years. As for “washed up,” Midler is the 2017 Tony Award winner for Best Actress and will play Bella Abzug in an upcoming Gloria Steinem biopic.

Washed up psycho @BetteMidler was forced to apologize for a statement she attributed to me that turned out to be totally fabricated by her in order to make “your great president” look really bad. She got caught, just like the Fake News Media gets caught. A sick scammer!

I apologize; this quote turns out to be a fake from way back in ‘15-16. Don’t know how I missed it, but it sounds SO much like him that I believed it was true! Fact Check: Did Trump say in ’98 Republicans are dumb? https://t.co/NY9s6V49el via @rgj

Yes, one must always check the quotes. That should take up, oh, maybe 23 of the 24 hours in the day? Because there are SO MANY LIES, most of them generated by Trump himself, that the task of separating the truth from the lies is impossible. Which is just how he likes it. #CHAOS

Trump has now had harsher criticism for Bette Midler, Meryl Streep, and Nordstrom than he has for Kim Jong-Un and Vladimir Putin. https://t.co/Bqr8d8gt6Z