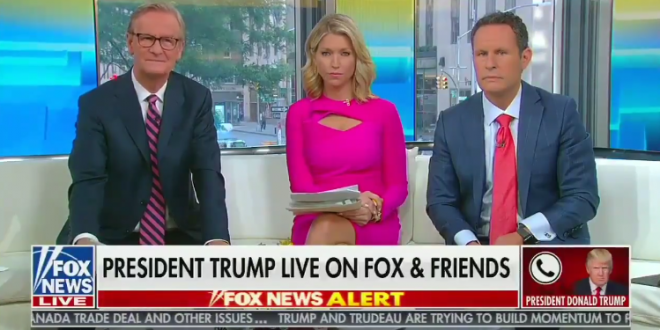 President Trump on Friday accused Speaker Nancy Pelosi (D-Calif.) of making a “fascist statement” when she said his administration is engaged in a “criminal cover-up.”

“It’s a fascist statement, it’s a disgraceful statement. I call her ‘Nervous Nancy,’ she’s a nervous wreck,” Trump said during a call-in interview on “Fox & Friends.”

Pelosi said last month that House Democrats believe the president is “engaged in a cover-up,” comments that prompted him to walk out of a meeting with Congressional leaders on infrastructure.

Explicitly copying Fox host Mark Levin, Donald Trump accuses Nancy Pelosi of behaving like a “fascist” by accusing him of a cover-up. pic.twitter.com/PwLbGNOlMz

Trump on “Fox and Friends,” responding to Pelosi saying there was a “criminal coverup,” calls it a “fascist statement,” “disgraceful statement” and “outrageous.” He says “it’s so unfair” what Dems are doing with their probes.