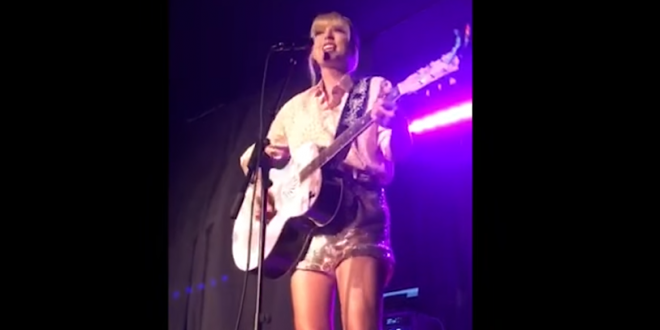 Taylor Swift is doubling down on her pro-LGBT activity during Pride month: Less than 24 hours after she dropped her new single “You Need to Calm Down,” which includes shout-outs to GLAAD and the LGBT community, she made a surprise appearance before about 100 people at the Stonewall Inn in New York’s Greenwich Village, the site of the pivotal 1969 riots that launched the gay rights movement.

After a rousing pair of songs from Sara Bareilles — including a version of “Brave” that had virtually all of the 100-odd lucky people inside singing along — Swift was greeted by the evening’s headliner, “Modern Family” star Jesse Tyler Ferguson. Diva Jackie Dupree, Gavin Creel, Lea DeLaria and Vincint were also on the bill. Before Swift performed, AEG, which co-hosted the event, presented Stonewall with a $50,000 check to support its Stonewall Inn Gives Back Initiative.

I’m so happy I don’t have to keep this secret any longer. Look who came to celebrate the 50th anniversary of Stonewall at the Stonewall Inn. @taylorswift13, you are a gem. Thank you for everything you do for the LGBTQ community. We ❤️ you! 🌈 https://t.co/ICE2b3arxU