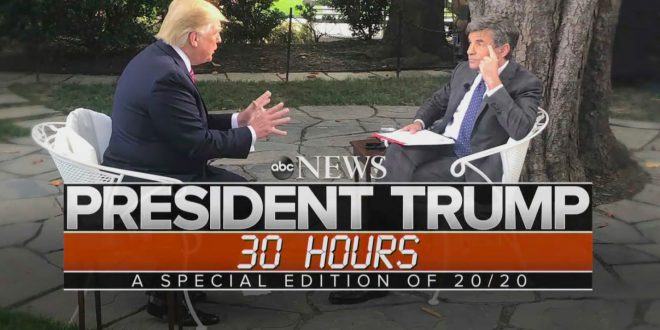 TV By The Numbers reports:

Are Americans growing tired of the Trump show? President Donald Trump’s interview with ABC News made serious headlines last week before its airing in full Sunday night, but according to the ratings, viewers were not all that interested in the hourlong special. The interview had fewer viewers than Celebrity Family Feud, which aired in the same time slot last week.

The interview, with ABC’s chief anchor George Stephanopoulos, came in third for its time slot Sunday night, with 3.91 million viewers. Celebrity Family Feud had amassed 6.1 million viewers, per TV by the numbers. The special could not compete with the finale of the U.S. Open on Fox, which drew 7.29 million viewers or CBS’ 60 Minutes, which came in at 4.67 million viewers.